Prior to the 1986-87 season at the age of 21, Steve Yzerman was named captain of the Red Wings and continuously served for the next two decades (dressing as captain for over 1300 games), retiring as the longest-serving captain of any team in North American major league sports history. Once voted to be the most popular athlete in Detroit sports history, locals often simply refer to Yzerman as 'The Captain.' Yzerman led the Wings to five first-place regular season finishes and three Stanley Cup championships (1997, 1998 and 2002). Steve Yzerman won numerous awards during his career, including the Lester B. Pearson Award in 1989, the Conn Smythe Trophy as the Most Valuable Player of the Stanley Cup Playoffs in 1998, the Selke Trophy as the league's best defensive forward in 2000, and the Bill Masterton Memorial Trophy for perseverance in 2003. He was a ten-time NHL All-Star, a First Team All-Star in 2000, and a member of the All-Rookie Team in 1984. On July 3, 2006, Steve Yzerman officially retired, finishing his career ranked as the sixth all-time leading scorer in NHL history, having scored a career-high 155 points (65 goals/90 assists) in 1988-89. 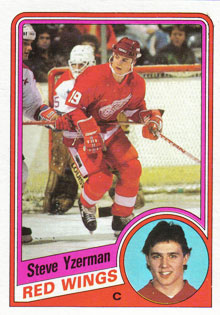