Michael Thomas Modano, Jr. (born June 7, 1970) is an American professional ice hockey player.The North Stars selected Modano as the first overall draft pick in the 1988 NHL Entry Draft at the age of 18, an honor shared by only five other Americans. Mike Modano is the all-time goal-scoring and points leader amongst American-born players in the NHL. He was also the last player on the Dallas Stars roster, and is the last active player in the NHL, that played for the franchise when it was in Minnesota. Mike Modano was drafted 1st overall by the Minnesota North Stars in 1988. The franchise moved after the 1992-93 season. With the retirement of Mark Recchi, Modano is the final NHL player from the 1980s still active in professional hockey. 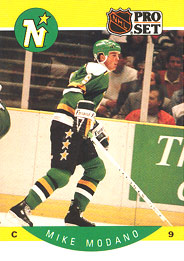