Mats Johan Sundin ( is a retired Swedish professional ice hockey player. Originally drafted first overall in 1989, Sundin played his first four seasons in the NHL with the Quebec Nordiques. Mats Sundin was traded to the Toronto Maple Leafs in 1994, where he played the majority of his career, serving 11 seasons as team captain. At the end of the 2007–08 NHL season, Sundin had been the longest serving non-North American born captain in NHL history. Sundin last played for the Vancouver Canucks in the 2008–09 season before announcing his retirement on September 30, 2009.

On October 14, 2006, Sundin became the first Swedish player to score 500 goals.He is the Leafs' franchise all-time leader in goals (420) and points (984). He is currently tied with Jaromir Jagr, Sergei Fedorov, and Patrik Elias for the NHL record for regular-season overtime goals (15). 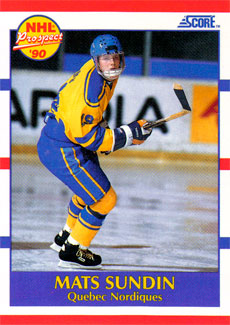