Douglas Daniel Weight (born January 21, 1971) is a retired American professional ice hockey player. Doug Weight was drafted by the New York Rangers in the 1990 NHL Entry Draft with their second pick, 34th overall. It was as an Oiler that Doug Weight earned his reputation as a premiere playmaker, leading Edmonton to five consecutive playoff appearances and scoring a personal-best 104 points during the troubled 1995–96 season. After enduring a second consecutive year decimated by a lingering back injury, Doug Weight announced his retirement following the 2010–11 season on May 26, 2011. 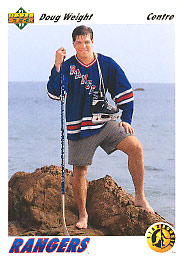