Denis Joseph Savard (born February 4, 1961) is a retired Canadian professional ice hockey player. Denis Savard played in the National Hockey League from 1980 to 1997, and was elected to the Hockey Hall of Fame in 2000. Denis Savard was drafted in the first round, 3rd overall, in the 1980 NHL Entry Draft by the Chicago Blackhawks. He was the highest drafted player in Blackhawks' history, until the organization drafted Patrick Kane with the first overall pick in 2007. He began his career during the 1980–81 NHL season. Denis Savard then went on to set the Blackhawks' record (since broken) for most points by a rookie with 75.

Denis Savard was known for his trademark move, the 'Savardian Spin-o-rama' , which entailed Savard whirling around with the puck in a full rotation allowing him to defeat defenders and goaltenders alike. Denis Savard won the Stanley Cup with the Canadiens in 1993. Savard's NHL career would end where it had started, with the Blackhawks. Savard officially retired from professional hockey on June 26, 1997. On March 19, 1998, the Blackhawks retired his jersey number #18. Savard was inducted into the Hockey Hall of Fame on November 13, 2000. 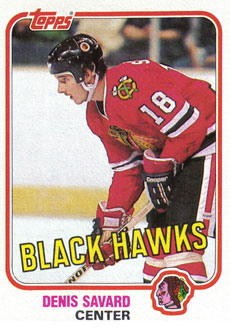