Teemu Ilmari Selanne nicknamed 'The Finnish Flash' (born July 3, 1970) is a Finnish professional ice hockey player in the National Hockey League (NHL). Teemu Selanne won the Stanley Cup with the Anaheim Ducks and holds the NHL's all-time rookie goal and point scoring records (76 and 132 respectively). Teemu Selanne was awarded the Calder Memorial Trophy with the Winnipeg Jets, the team in which Selanne was originally drafted into the NHL in the 1st round, 10th overall in the 1988 NHL Entry Draft.

Teemu Selanne is a ten-time NHL All-Star and a three-time top goal-scorer in the NHL. He is the all-time points leader in men's Olympic ice hockey with 37 points in 31 games. He scored his 600th goal on March 21, 2010 against the Colorado Avalanche. 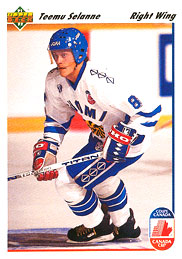