Robert Bowlby Blake (born December 10, 1969) is a retired Canadian professional ice hockey player. Rob Blake was selected 70th overall in the 1988 NHL Entry Draft by the Los Angeles Kings, In 1997-98, Rob Blake received the James Norris Trophy as the NHL's best defenceman. In 2001, Rob Blake was traded to the Colorado Avalanche and won his first and only Stanley Cup. On June 18, 2010, Rob Blake announced his final retirement from professional hockey. In 2008, Rob Blake appeared in the Mike Myers film The Love Guru as himself. 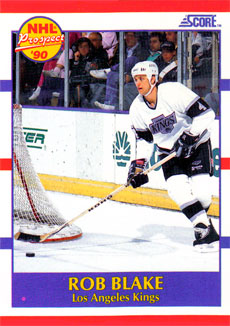