Philip Joseph Kessel, Jr. (born October 2, 1987) is an American professional ice hockey forward of the National Hockey League (NHL). Phil Kessel was the fifth-overall pick of the 2006 NHL Entry Draft, taken by the Boston Bruins. In his rookie season, he was awarded the prestigious Bill Masterton Memorial Trophy.

On December 11, 2006, his family announced that Phil Kessel was hospitalized for a reason unrelated to hockey. Later during the day, a sportscaster confirmed that Phil Kessel was diagnosed with a form of testicular cancer. On December 16, 2006, Kessel was announced cancer-free.Phil Kessel returned to the Bruins line-up on January 9, after missing only 11 regular season games following cancer surgery. On September 18, 2009, the Boston Bruins traded him to the Toronto Maple Leafs, where he quickly signed a five-year, $27 million contract. On April 6, 2011, Kessel had his third consecutive 30 goal season. 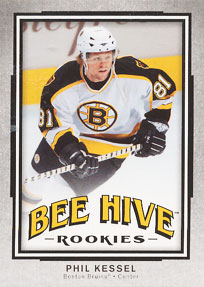