Patrick Timothy Kane II (born November 19, 1988) is an American professional ice hockey right wing/center for the Chicago Blackhawks of the National Hockey League (NHL). The Blackhawks selected him with the first overall pick in the 2007 NHL Entry Draft.

Patrick Kane made his NHL debut on October 4, 2007 against the Minnesota Wild, and had his first assist and first shootout goal, a game-winner, two days later against Dominik Hasek of the Detroit Red Wings. In the final season of his initial rookie contract, Kane signed a 5-year, reported $31.5 million extension to remain with the Blackhawks on December 3, 2009.

In the 2009–10 season, Kane finished with a career-high 88 points to rank 9th in the NHL in scoring. On June 9, 2010, Kane scored the overtime winner when he shot the puck under the pads of Flyers goalie Michael Leighton and into the net, winning the Blackhawks the Stanley Cup. The goal ended a 49-year Stanley Cup drought for the Blackhawks. It also made Kane the youngest person in NHL history to score a Stanley Cup winning goal in overtime; that title previously belonged to Bobby Orr in 1970. 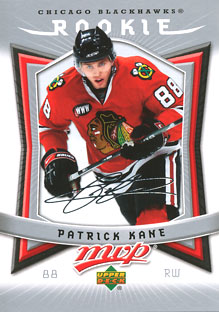