Owen Liam Nolan (born February 12, 1972) is a Irish-born Canadian professional ice hockey player.Owen Nolan was drafted first overall by the Quebec Nordiques in the 1990 NHL Entry Draft, and played with them until nine games into the 1995–1996 season (this was the first season the team played in Colorado as the 'Avalanche'), when he was traded to the San Jose Sharks. During his tenure with the Sharks he was named captain, and registered his best career year in 1999–2000, finishing with 84 points, and tied for second in the NHL with 44 goals.

In the 1997 NHL All-Star Game, playing in front of his home crowd in San Jose, Owen Nolan performed a 'Called Shot'. Nolan pointed to the top corner of the net during a breakaway and promptly scored there against goaltender Dominik Hasek, to complete a hat trick. 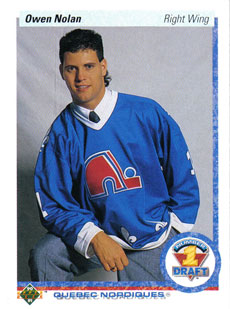