Luc Robitaille (born February 17, 1966) is a retired Canadian professional ice hockey player. Robitaille was drafted by the Kings in the ninth round (171st overall) of the 1984 NHL Entry Draft. Many hockey experts expected Robitaille to be drafted late in the draft due to his poor skating ability. During his 19-season National Hockey League (NHL) career, Luc Robitaille won a Stanley Cup in 2001–02 with the Detroit Red Wings, and played for the Pittsburgh Penguins and New York Rangers, but is most known for his fourteen seasons, over three different stints, with the Los Angeles Kings.

Luc Robitaille served as Kings team captain during the 1992–93 and 2005–06 seasons. Robitaille retired after the 2005–06 season as the highest-scoring left winger in NHL history and the holder of several Kings franchise records, as well as numerous Kings playoff records. 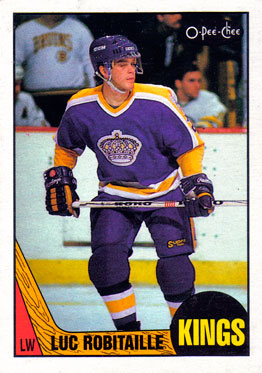