John Carter MacLean (born November 20, 1964) is a former Canadian ice hockey player, and former head coach of the New Jersey Devils. He was most recently an assistant coach with the Carolina Hurricanes.

John MacLean was selected 6th overall in the 1983 NHL Entry Draft. He was selected as the 1st choice of the New Jersey Devils. MacLean made his Devils debut on October 5, 1983 against the New York Rangers. Perhaps his most memorable moment as a Devil came on April 3, 1988, when he scored a goal in overtime against the Chicago Blackhawks to send the Devils to the playoffs for the first time. 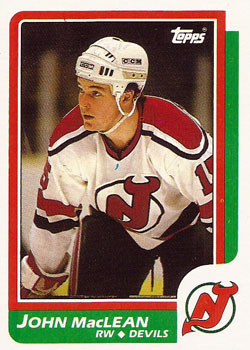