Jari Pekka Kurri (born May 18, 1960) is a retired Finnish professional ice hockey right winger and a five-time Stanley Cup champion. Jari Kurri finished his career as the highest scoring European-born-and-trained player in NHL history. Jarri Kurri Jarri was drafted 69th overall, in 1980. When Jari Kurri arrived to the Oilers he was soon paired with Wayne Gretzky. The duo of Kurri and Gretzky became one of the most prolific scoring tandems ever to play in the NHL

Jari Kurri was also the highest ranked non-Canadian in NHL points and goals. He is the first Finn to be inducted into the Hockey Hall of Fame. Jari Kurri is the second leading point-scorer in Oilers history. His #17 has been retired by the Edmonton Oilers, the Finnish national team, and Jokerit. In addition, the Jari Kurri trophy is given to the most valuable player in the SM-liiga playoffs. In 2000 Jari Kurri was named along with longtime linemate Gretzky to the International Ice Hockey Federation Hall of Fame. 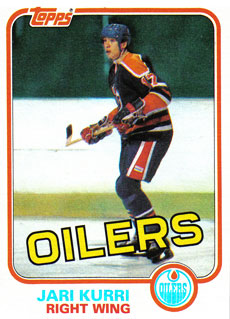