Stephane Richer was known to have one of the hardest shots in the NHL during his playing days, coupled with an extremely quick release. Unlike many other players, Richer only had to wind up his stick to about waist height to achieve full power on his shot. Recognition of his hard shot was noticed even more when Fleer trading cards included Richer in their 'Slapshot Artists' limited set for the 1994–95 season. During the 1994 New Jersey Devils team-only skills competition prior to the All-Star Game, Richer recorded multiple slapshots that exceeded the 100 mph mark.

He was openly criticized by other players for his comments during the NHL lockout of 1995 leading to 1/2 the normal season when he stated '...we should be playing hockey', when asked about the strike and his feelings about the negotiations. Richer confirmed during the 2001-02 season that he has been battling depression during the majority of his career. 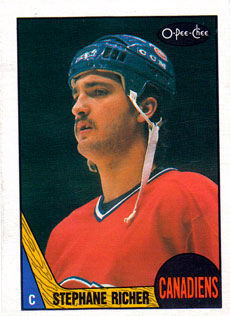