Paul Tetsuhiko Kariya (born October 16, 1974) is a Canadian retired professional ice hockey winger who played 15 seasons in the National Hockey League (NHL). Known as a skilled and fast-skating offensive player, he played in the NHL. Selected fourth overall in the 1993 NHL Entry Draft by the Mighty Ducks, Paul Kariya joined the team in 1994–95 and was named to the NHL All-Rookie Team.

During his nine-year tenure with Anaheim, Kariya formed an effective duo with fellow winger Teemu Selanne that helped him to three NHL First All-Star Team distinctions, while also finishing as the first runner-up for the Hart Memorial Trophy in 1997. Not an aggressive player, he won back-to-back Lady Byng Trophies in 1996 and 1997 as the league's most gentlemanly player. Serving as a captain for seven seasons, he led the the Mighty Ducks to the 2003 Stanley Cup Finals. He played two seasons in Nashville, setting team records for points scored in a single-season in 2005–06. 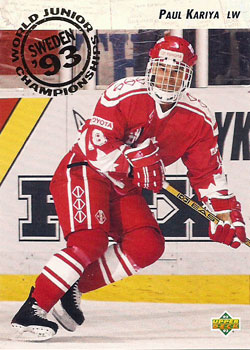