During his rookie season, Bergeron was selected for the NHL YoungStars Game in Minnesota as part of the 2004 All-Star weekend. After recording 3 goals and 4 assists in the first 10 games of the 2007–08 season, Bergeron suffered a season-ending head injury during a game on October 27, 2007. After the 2008–09 season began, Bergeron scored his first goal since his concussion on October 23, 2008. Patrice Bergeron was once again concussed after a hit from Claude Giroux on May 6, 2011. Patrice Bergeron became the 25th member of Triple Gold Club on June 15, 2011, with the Bruins when they won the Stanley Cup. 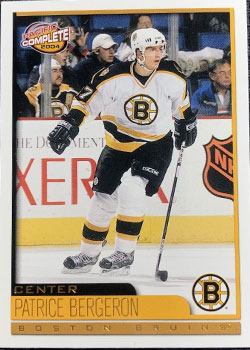