Pernell Karl 'P. K.' Subban (born May 13, 1989) is a Canadian professional NHL ice hockey defenceman . P.K. Subban's parents, immigrated from Jamaica to Canada in the 1970s. P.K. Subban was drafted by the Canadiens in the second round, 43rd overall, of the 2007 NHL Entry Draft. He is a two-time gold medal winner with Team Canada at the World Junior Championships.

On March 20, P.K. Subban became the first Canadiens rookie defenceman to score a hat trick in a game. This feat came in an 8-1 victory against the Minnesota Wild on March 20, 2011. 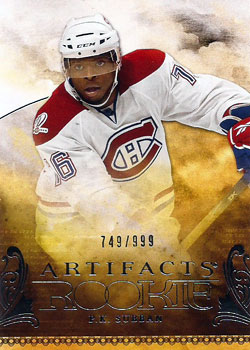