Nathan MacKinnon was signed to his first NHL contract, a three-year entry level deal, with the Avalanche on July 9, 2013. He made his NHL debut on October 2, 2013 becoming the youngest hockey player to ever dress in a regular season game for the Colorado Avalanche franchise, registering two assists in a 6 - 1 Colorado victory. MacKinnon became just the third player in NHL to record seven points in his first two playoff games.

On June 24, 2014 MacKinnon won the Calder Memorial Trophy for the rookie of the year. He is the youngest player to ever win this trophy. 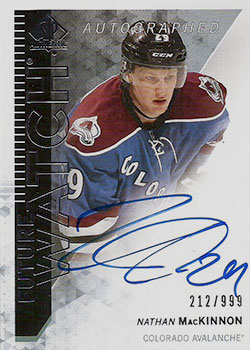