Evgeni Vladimirovich Malkin (born July 31, 1986), also popularly known as Geno, is a Russian professional ice hockey center. Chosen second overall in the 2004 NHL Entry Draft by the Pittsburgh Penguins, Evgeni Malkin's career in the NHL was delayed because of an international transfer dispute until 2006–07, in which he captured the Calder Memorial Trophy as the league's best rookie.

In his second season, he helped carry Pittsburgh to the 2008 Stanley Cup Finals and was a runner-up for the Hart Memorial Trophy. The following season, Malkin won the Art Ross Trophy, awarded annually to the top-scorer in the NHL. Evgeni Malkin then led all players in playoff scoring, en route to a Conn Smythe Trophy and the Stanley Cup championship. Evgeni Malkin is the First player since 1917–18 to score goals in each of his first six NHL games (Oct 18 - Nov 01, 2006). 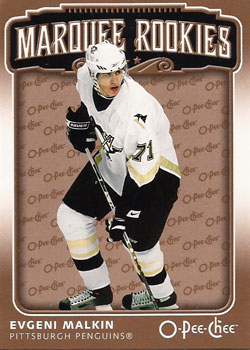