Brendan Adam Mathew Gallagher (born May 6, 1992) is a Canadian professional ice hockey player. He was selected by the Montreal Canadiens in the fifth round (147th overall) of the 2010 NHL Entry Draft.

After the trade of Michael Ryder back to the Canadiens, Gallagher switched from jersey number 73 to 11. On May 6, 2013, Gallagher was also nominated for the Calder Memorial Trophy, awarded to the NHL's Rookie of the Year, and placed second in voting. 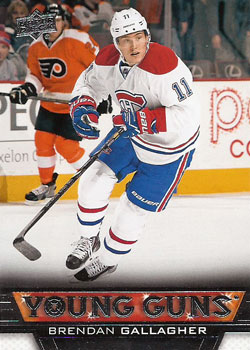