Maxim Lapierre (born March 29, 1985) is a Canadian professional ice hockey forward of the National Hockey League (NHL). Drafted out of the Quebec Major Junior Hockey League (QMJHL), he was selected 61st overall in 2003 by the Montreal Canadiens.

Maxim spent parts of his first three professional seasons with the Canadiens' minor league affiliate, the Hamilton Bulldogs of the American Hockey League (AHL) before playing his first full NHL season in 2008–09. Lapierre spent five-and-a-half seasons in the Canadiens organization before being traded to the Anaheim Ducks in December 2010. Two months later, he was traded again to the Canucks. A checking forward, Lapierre is known as an agitator. 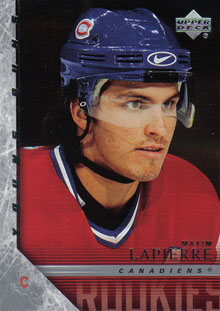