Connor McDavid (born January 13, 1997) is a Canadian ice hockey centre and captain for the Edmonton Oilers of the National Hockey League (NHL).

McDavid was drafted first overall in the 2015 NHL Entry Draft by the Edmonton Oilers. On July 3, 2015, McDavid signed a three-year entry-level contract with the team. He made his NHL debut on October 9, 2015, in a 3–1 loss to the St. Louis Blues.

McDavid scored his first goal (and point) four nights later against goaltender Kari Lehtonen, in a 4–2 loss to the Dallas Stars. On November 3, 2015, he broke his clavicle during a game against the Philadelphia Flyers and missed 37 games. He returned to the line-up on February 2, 2016, scoring a goal and gaining two assists. In his first game against his boyhood team, the Toronto Maple Leafs, McDavid had his first five-point night, recording a point on every goal in a 5–2 victory, including three assists (on three Jordan Eberle goals) and two goals. He finished 3rd in voting for the Calder Memorial Trophy as the NHL's Rookie of the Year despite participating in only 45 games in his rookie season.

On October 5, 2016, McDavid was named captain of the Oilers, making him the youngest captain in NHL history. At 19 years and 266 days, McDavid was 20 days younger than Gabriel Landeskog when he was named captain of the Colorado Avalanche. On January 18, McDavid recorded his 100th career point with an assist against the Florida Panthers, doing so in 92 games and becoming the fourth fastest active player to reach 100 points. 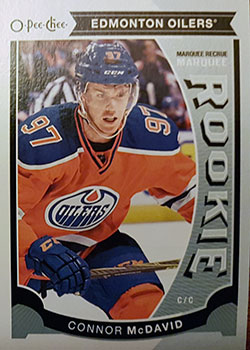