Vladimir Tarasenko's father, Andrei, was a former Russian league scoring champion and Olympian. Tarasenko was drafted by St. Louis Blues 16th overall in the 2010 NHL Entry Draft via a trade on June 25, 2010.

On January 13, 2012, Tarasenko was traded to SKA Saint Petersburg for Vyacheslav Solodukhin. On June 2, 2012, Tarasenko announced that he would be coming to North America to play in the NHL for the St. Louis Blues rather than stay and play in the KHL.[8] However as a result of the 2012–13 NHL lockout Tarasenko instead returned to SKA. He credited the decision in part to a desire to play with Ilya Kovalchuk, the captain of the team who also joined as a result of the lockout.

Once the lockout ended, Tarasenko started the 2012–13 NHL season with the Blues. He scored his first and second goals on the first two shots of his NHL debut on January 19, 2013. On April 18, 2015, Tarasenko recorded his first Playoff career hat trick 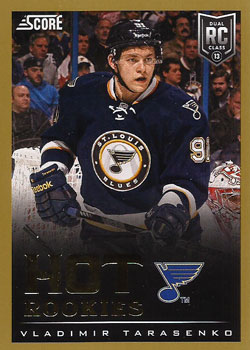